Unless you’ve been living under a rock, you probably know the second round of World Cup matches start this Saturday.  With the exception of a few notable injuries, the players are looking healthy—but what about the women in their home countries?  On Saturday, Akimbo will begin posting facts about women’s health and rights for each country scheduled to play that day, along with more in-depth coverage of how the games affect women and innovative projects that are being done to raise awareness. We promise facts, fun, and absolutely no vuvuzelas!

Since the games are being held in South Africa, our first Fact Flash focuses on that country, brought to you by the amazing people at Lesbians and Feminists for the Decriminalization of Abortion: 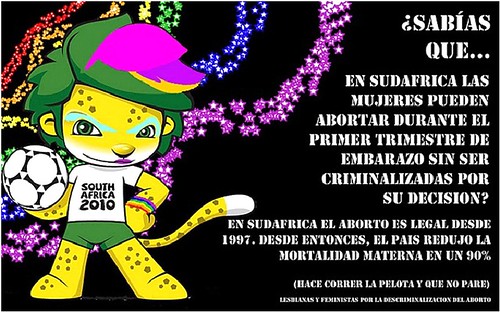 It says, “In South Africa, abortion has been legal since 1997.  Since then, the country reduced maternal mortality by 90%.”

We hope you’ll join the conversation and let us know who you’re cheering for. One thing we’re all rooting for?  The health and rights of women and young people worldwide!

3 responses to “The Big Kick-Off: World Cup and Women's Health”