At Sundari Ravindran’s request, we have deleted the first two sentences of the last paragraph in this post and edited the third paragraph. Her explanation of the need for the deletion is at the end of the post. We apologize for misconstruing Sundari’s words, and commend CommonHealth for the efforts they’ve made to promote campaigns against the neglect of daughters and preference for sons, including but not limited to supporting the prevention of illegal pre-natal diagnostic techniques for sex-determination. 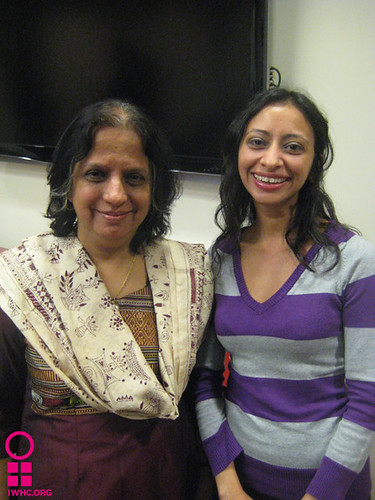 Sundari Ravindran, one of our amazing program partners (pictured above with Asia Program Officer Khushbu Srivastava), joined us for a discussion at the IWHC offices recently. The topic: sex-selective abortion. Until meeting Sundari, a co-founder of CommonHealth, a group that promotes maternal health, safe abortion and neonatal health in India, I thought the issue was simple: favoring the birth of a boy over that of a girl is not only discriminatory, but it leads to gender imbalance and eventually undermines the future of entire communities. This week’s Economist—and many international agencies including the UN—have framed the issue this way.

Surprisingly, the truth is a lot more complicated and has sparked heated debate in India: the fight to stop sex-selective abortions has actually had a detrimental effect on women’s access to safe abortion services in that country.

Abortion has been legal in India since 1971, but in recent years, concerns over sex-selective abortions have led to unofficial restrictions for all women. Campaigns have been mobilized in the name of women’s rights calling for protection of “the unborn girl child”—language that eerily echoes that of the anti-abortion movement.

In rural areas of India as much as 50 percent of women who want to have an abortion are unable to find local services to terminate their pregnancy. Even when a skilled abortion technician is available, services are often denied because doctors fear being accused of performing sex-selective abortions. When a woman comes in wanting a second trimester abortion for whatever reason, she’s often seen as guilty of asking to terminate the pregnancy for sex-selection reasons—and there’s no way of proving otherwise.

*We must find ways of combating discrimination against female children that doesn’t endanger or restrict the rights of women who are alive in the world today. Through CommonHealth, Ravindran continues to stand for the legal rights of girls and women through all stages of their lives and spotlights the ways in which they are being violated or denied today. The organization has worked to educate decision makers including doctors, nurses, journalists, policy makers and health systems administration workers and does extensive outreach in areas where female birth rates are extremely low to inform women and their families of their rights. The thinking is this: education, not the denial of rights, is the path toward positive change.

b)  At no time did I ever say something to the effect “a sex-selective abortion could potentially save the life of the mother” – this appears to be an interpretation by the blog-writer based on the association of unwanted female births with depression, abuse etc. It is really unfortunate that such interpretations were drawn and then written up in a way that does not quite attribute it to me but nevertheless links it to me.

22 responses to “Birth rights: Is the fight against sex-selective abortion hurting women?”