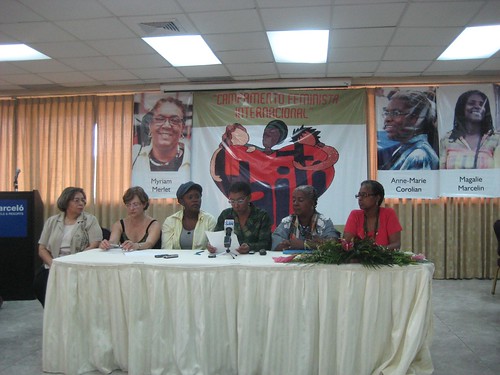 The Camp, which was named after three feminist leaders who died in the recent earthquake in Haiti, is a physical and digital hub to channel international solidarity to women’s organizations and women in general in Haiti. The Camp is providing ongoing assistance to Haitian women’s organizations in their process of restructuring. The group of organizers is also monitoring the work of international aid agencies to ensure attention is paid to the specific needs of women and girls.

At the meeting that launched the Camp in Santo Domingo last week, I had the opportunity to hear Haitian feminist advocate Lise-Marie Dejean, former Minister of Women’s Affairs and current General Coordinator of SOFA, Solidarite Fanm Ayisyen (Haitian Women in Solidarity). Despite her personal and material losses, which included her house, Lise-Marie is finding the inspiration to move ahead and plan how SOFA will help out other women. In that effort, she mentioned the encouragement she and her colleagues have been receiving from Dominican advocates such as Sergia Galván, of Colectiva Mujer y Salud (Collective Women and Health), who motivated them to get together for their first meeting, a week after the earthquake.

In such a chaotic moment, the Feminist Solidarity Camp shows us that the Haitian activists are not alone in the struggle to ensure health and rights for all Hatian women in the aftermath of the earthquake. In several countries of Latin America, feminist organizations have created focal points that are receiving donations and other contributions for the Camp. Some of them are heading to Haiti to ensure an alternative media coverage and work with the Haitians in the reconstruction, among other activities.

For those of you who are wondering how Haiti will rebuild itself after such a widespread destruction, I hope the words of journalist Nadiejda Jean, member of SOFA, give you some inspiration. I asked Nadiejda, a mother of two young girls that lost her house and all belongings, for a message for feminist activists around the world. She said, “The earthquake will not stop us from fighting for women’s rights.”