In India abortion is legally available during the first 20 weeks of pregnancy in a variety of cases: when there is risk to the mother’s life, physical or mental health; rape or fetal abnormality; as well as social or economic reasons. India has had legal abortion for about the same length of time the United States has; it was granted under the Medical Termination of Pregnancy (MTP) Act in 1972. 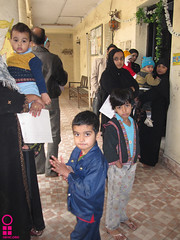 [At left, women and their children waiting for family services at a public health clinic in North Delhi]

Despite a relatively liberal legal framework, provision of abortion services within the public health system remains low, estimated at only 72,3142 per year in 2000. However, the Consortium on National Consensus for Medical Abortion in India estimates that the real number of abortions that take place annually is 11 million. Of that, it is estimated that approximately 20,000 women die every year due to abortion related complications.

During my recent trip to India, I visited the International Women’s Health Coalition’s partner CommonHealth, a network of over forty organizations who are working to expand advocacy for maternal-neonatal health and safe abortion in India. I traveled to Uttar Pradesh, a state that consistently has amongst the poorest indicators on women’s health in the country. In 1997, there were an estimated 707 maternal deaths per 100,000 live births (Sample Registration System, 1998), almost eight times that in Kerala and 70 percent higher than the national average. Every year, there are 40,000 maternal mortality deaths and 10,000 women in the state die as a result of unsafe abortions.

From Delhi, it was a six hour journey to arrive at some small villages in the Azamgarh district, a very remote town (where my mother is actually from!). CommonHealth is supprting a grassroots non-governmental organization (NGO) called Gramin Punarniirman Sansthan (GPS) to help women increase their awareness of their legal rights to safe abortion, and to start advocacy for abortion services at the district level.

GPS is a modest grassroots NGO with an annual budget of approximately $150,000. This is the view of their office in a small village. They ride bicycles for up to six hours in order to reach different villages.

The women I talked to said that they prefer to go to unauthorized/untrained abortion providers, who are basically quacks and charlatans, for services because they are assured privacy. While services through these charlatans is more expensive, privacy is much needed, given the social stigma surrounding abortion, particularly for unmarried women. Women reported that nearly every month, there is on average one woman per village who is rushed to the hospital due to an unsafe abortion. 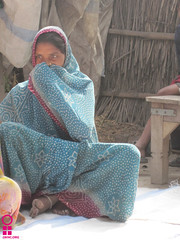 Despite increasing attempts to mobilize civil society to advocate for improved abortion services, many women and girls in remote rural settings across India do not know that abortion access is sanctioned by law. 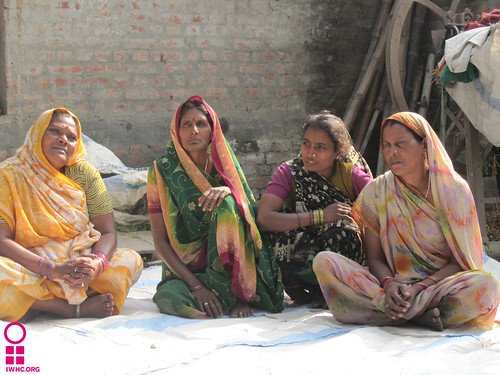 One of the most moving experiences for me during this trip was when one woman kept arguing that abortion was immoral. When I asked her why, she said because thousands of women are dying from it across Uttar Pradesh. Doctors don’t know how to perform it, and nor do the charlatans. She explained that women get tuberculosos from abortion pills. I asked if it was possible that abortion was provided safely and free of charge, would she still think that it was immoral. She replied, well, of course then it wouldn’t be immoral, but it would never be possible that abortion could be free and safe.

Her words really shows what grassroots activists know intimately- that one of the hardest thing about promoting women to be effective advocates is to create the faith in them that there can be improvements.

Despite many challenges, in only four months, GPS was able to influence the district health plan to expand abortion services from only being provided in 2 public health clinics to now being provided in 6. In the next phase of their work, GPS will build on their work to sensitize various stakeholders about women’s abortion rights and have women discuss issues directly with their district- level health administrators. 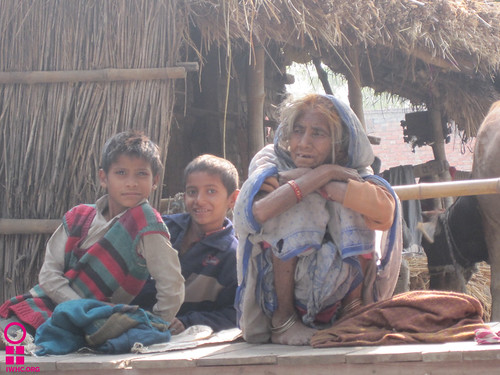 Neelam and Bandana are two young women working for GPS (pictured left and center, posing with me on the right). They live in the same villages that they advocate in. They told me that they believe that there is still much more work to be done. “Women have begun 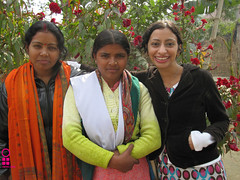 discussing the topic openly, at least with one another. That is such a big step, given the cultural norms and tradition here. We know that we have to go much further in helping women understand their rights and being able to have the confidence to fight for that.” What do they envision next? Neelam says, “I keep trying to convince the women to lock the public health clinic and not let the doctors enter unless they promise to come on time and offer the services that they are supposed to. Maybe next time you come to visit, we’ll tell you how the sit-in went.”

Khushbu Srivastava is the Program Officer for Asia at the International Women’s Health Coalition. She took all the pictures in this post. Read her bio here.

2 responses to “Photoblog: A Look at Abortion Access & Clinics in India”