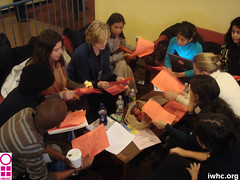 This year, a strong new class of visionary youth activists advocated on behalf of the largest generation of youth ever at high-level international conferences. At the International Congress on AIDS in Asia and the Pacific (ICAAP) in August, the Asia Pacific Conference on Reproductive and Sexual Health and Rights (APCRSHR) in October, and the NGO Forum on Sexual and Reproductive Health and Development in September, for example, they presented action agendas and released compelling youth statements, demonstrating the power of meaningful participation by and for young people on the international stage.

What’s next: In the next year, IWHC will continue its support of several organizations and networks to secure young people’s health and human rights, including the YP Foundation in India, which was founded and is managed by young people.  In January 2010, IWHC will launch Young Visionaries, a campaign devoted to showcasing the voices and the work of a new generation of advocates. In March 2010, we will hold an Advocacy in Practice (AiP) workshop for young leaders during the 54th UN Commission on the Status of Women to persuade powerful global actors who create policies and control budgets to invest in young people.