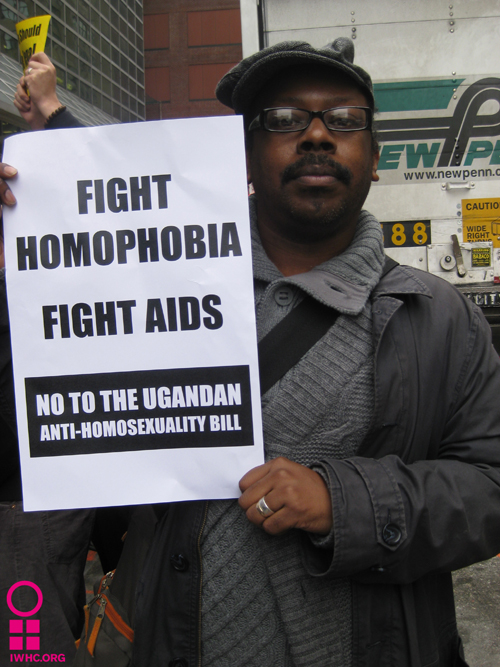 A small but dedicated crowd of activists, journalists, and clergy from New York and the surrounding area showed up at the Uganda House at 12:30 yesterday afternoon to protest the anti-homosexuality bill currently under consideration in the Ugandan parliament. Many of the protesters carried signs decrying the bill, and amid shouts of “gay rights are human rights” and “stop the bill, stigma kills,” representatives from the African Services Committee, Human Rights Watch and the International Gay and Lesbian Human Rights Commission delivered to the embassy a letter demanding the dismissal of the legislation. Most of the protesters, when asked what brought them out in the rain to take a stand, told us that they were worried about the extremity of the bill and the possibility of further stigmatizing LGBTQI citizens in Uganda, making it harder for them to access vital health and legal services. Many protesters pointed out the conflict between this bill and the international human rights documents to which Uganda is committed, and called for the Ugandan government to take a positive stand on the human rights of all of its citizens, regardless of sexual orientation or gender identity. In the words of Damon Bolden, pictured above, “I’m here to let the Ugandan government know that what they’re doing isn’t right and to let the citizens know that there are people in the world who care.”

5 responses to “Report Back: Rally Against Uganda’s Anti-Homosexuality Bill”