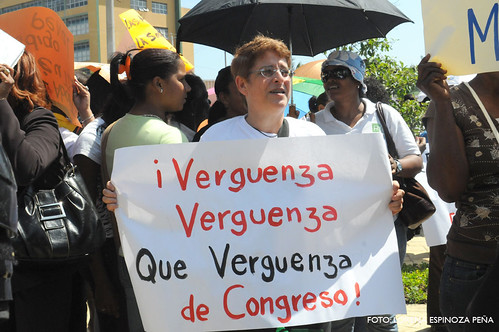 Back in April, we wrote our first in a series of posts covering a development in reproductive rights law in the Dominican Republic that could effectively make any type of abortion unconstitutional and outlaw several forms of birth control. The development is a piece of legislation in the Dominican Congress called Article 30, which if passed as proposed will establish the right to life from conception.

There are a lot of Dominican feminists working very hard on this issue, along with support from international organizations. One of the Dominican groups is the Colectiva Mujer y Salud (site in Spanish), which has offices in Santo Domingo, Monte Plata, and Elias Piña. They’ve been keeping us in the loop about what is happening locally, and after the huge May 6th Gran Marcha, during which Dominicans took to the streets, many carrying signs that read “Vergüenza, vergüenza, que vergüenza de congreso” (“Shame, shame, shame on congress”). La Colectiva sent us a batch of really great photographs of the protest (one of them is above), shot by Lorena Espinoza Peña – you can see the full set of 36 photos on our Flickr stream.

There’s been a bit of a holding pattern happening over the summer, and we’re not quite sure when the next reading of Article 30 will be or when it will move forward within the Dominican government. I had a conversation with Jaweer Brown, the Director of International Programs at Planned Parenthood of New York City, about what activists can do. Planned Parenthood New York City has an office in the Dominican Republic which is the hub of their work in Latin America, and they’ve been working closely with Colectiva Mujer y Salud to support women’s access to reproductive health care and safe abortion. Jaweer said that while we’re waiting for more information about when the next reading of Article 30 will take place, “It’s important to work to raise awareness, particularly among Dominicans, which in New York is a significant population.” She emphasized, “There needs to be greater debate about reproductive health in the Dominican Republic, with public mobilization and open discussion of the issues.”

Here are some suggestions on what you can do:

• If you are a Dominican citizen (including folks from the Dominican Republic who live in the United States), you should contact your representative and urge them to strike Article 30. Find your Senator here and your Diputado here.
• For people in the international community who want to help, things are a little less concrete. At the moment, it’s best to stay informed, keep engaged with the information coming from the Dominican Republic about the issue, and encourage your Dominican friends to make their opinions known to their representatives.