From a speech given at the 20th World Population Day in Abuja, Nigeria. Read Part 1 and Part 2 in this three-part series. 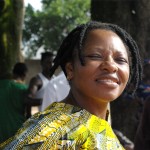 As I prepared this presentation on a recent Friday night, I was called five times by a woman who was being battered by her husband.  The very next day, she said that even though he said he felt bad and would not do it again, he was searching for a cane to flog her.  She cried as she told me over the phone that he has promised to do something to her that she will regret even in her grave.  Crying, she called on Sunday morning after having been battered again.

There too many women like her in Nigeria and throughout the world.  Violence against women is just one example of daily violations of the most basic human rights of women and girls.

To imagine a Boeing 747 crashing weekly and governments doing nothing about it is out of this world, but that is the equivalent of number of women that die weekly as a result of pregnancy related causes. HIV/AIDS rates are also staggering, with girls ages 10 – 24 seven times more likely to become infected than boys.  Girls and women face sexual coercion, child marriage,  and lack access to critical basic health services and information, including access to contraception.

We must invest in women and girls as a matter of right.  It is the right of women and girls to have access to and benefit from resources, services, opportunities, and rewards required for them to self actualize.

The good news is that there is a blueprint for action.

At the highest levels, we have political commitments. In the United Nations, the world’s governments have repeatedly agreed on the necessary actions to secure the health and rights of women and young people since 1974—35 years ago. In April of this year, the United Nations Commission on Population and Development—the CPD—reviewed the world’s progress toward implementing the “Programme of Action” agreed to by 179 countries at the 1994 International Conference on Population and Development—the ICPD. Governments not only reaffirmed their commitment to the ICPD Programme of Action, but agreed on precise action steps to make faster progress toward the core ICPD goals and, in doing so, to reach the Millennium Development Goals in the remaining five years of their mandates.

And while the United Nations, governments, and civil society have made some progress toward protection of human rights and access to reproductive health, we have a long way still to go.   Since the world first shifted its attention in 1974 to the discrimination, violence and inequality experienced by women, two new generations have been born.  Today, more than one-third of the world’s population—2.4 billion people—are 19 years-old or younger.

So I am also here for them, and to say to you that today’s young people want the information, skills, and opportunities to grow up differently from their parents. They aspire to a world in which every woman’s health and human rights are assured.

We have a blueprint for action, and I am here today to ask you to endorse it, promote it, and fund it today:

We have an unprecedented opportunity. Today more girls are in school than ever before, countries are addressing health disparities and more women and men are standing up for human rights.  Yet these gains are threatened by the financial crisis if we do not continue these critical investments.

It is our obligation to act now—to ensure that these new generations, and those to come, do not suffer and die as their mothers have. Let us secure every woman’s right to a just and healthy life. Let us invest in women and girls.