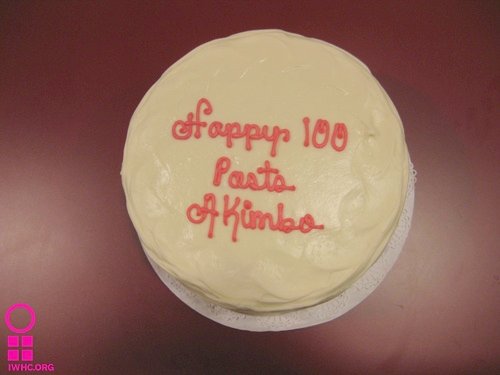 You’re looking at the 100th post here on Akimbo – something of which we at the International Women’s Health Coalition are very proud. We’re so proud of this that we bought our blog a celebratory cake! Of course the blog, being a blog, couldn’t eat the cake itself, so the staff had to step in and make sure it got eaten (it did).

Here are our ten most favorite posts so far, in no particular order:
Female Condoms: Demand and Distribution, with our first video to get more than 10,000 views on YouTube. Post and video are by Audacia Ray, featuring IWHC staff Kate Bourne and Jen Wilen.

Internet vs. SMS: Geography, Access, and Strategies for Health Promotion, a slightly tech geeky post by Audacia Ray, inspired by the Sex::Tech conference.

Technically these are three different posts, but all part of the same series written about the Pope’s visit to Cameroun by partners and staff who were there. Damaris Mounlom, a Coordinator at Femmes, Santé, et Développement en Afrique Sub-Saharienne (FESADE) in Cameroun, wrote From Cameroun to the Pope: Reality Check Please, while Jen Wilen followed up with The Pope in Cameroun: Reactions from the Front and The Pope Spends His Last Day in Cameroun.

After the same conference, Chelsea Ricker wrote the post Keeping the T in LGBTQQI.

Kelly Castagnaro looked at the trouble in Iran with human rights defenders being intimidated and jailed in Pushing Back, Moving Forward: The Struggle for Gender Equality in Iran

Lori Adelman reported back on her experience listening to a conversation at the United Nations between former U.S. Surgeon General Dr. M. Joycelyn Elders and Dr. Padmini Murthy of the International Medical Women’s Association in her post A Matter of Attitude and Articulation: Panelists at the UN Highlight Common Ground in Ongoing Fight for Women’s Domestic and Global Health 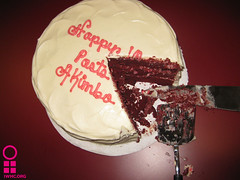 And yes, that is a red velvet cake with cream cheese icing. It was delicious.