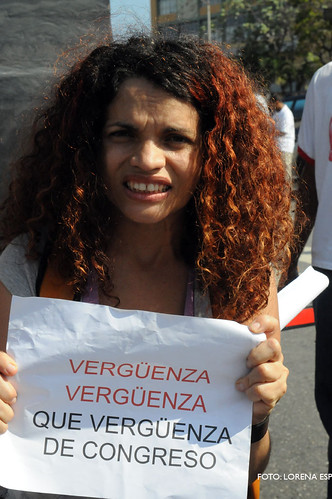 We have another update from our Dominican colleagues Colectiva de Mujer y Salud:

For the past few weeks, the national Congress of the Dominican Republic has been reviewing a controversial bill that would amend the Constitution and define the right to life “from conception to death.”  On April 21, 2009, Article 30, was approved by the executive branch under pressure and threats from the Catholic hierarchy and right-wing extremists.

Article 30 would represent a significant step back for women’s human rights, and approximately 100 civil society organizations have organized a number of mobilizations, including a national march on Congress on May 6.   To see photos of the protests, click  here.

In addition to voicing opposition to Article 30, women’s rights organizations are asking that during the second reading, when, according to the regulations governing the assembly, Article 30 must be discussed and is once again subject to approval, Congress modify its language or maintain the current language of the Constitution.

In light of this serious situation, Colectiva is requesting support and a show of solidarity on May 6.  Please write to the Dominican Republic embassy in your country and let them know that women’s health and rights will be compromised if the language of Article 30 is approved as it is now written.

On April 21, 2009, Article 30, which amends the current Constitution of the Dominican Republic by establishing the right to life “from conception to death,” was approved under pressure and threats from the Catholic hierarchy and right-wing extremists.

This article will severely and negatively impact public policies, medical practice, scientific development and women’s lives, especially poor women. It also violates international agreements signed and ratified by the Dominican Republic, such as the International Covenant on Civil and Political Rights, the American Convention on Human Rights and the Convention on the Elimination of All Forms of Discrimination Against Women.

Article 30 limits women’s autonomy, and denies them their human rights. In light of the significant step backwards that the approval of Article 30 would represent for the human rights of Dominican women, I ask that during the second reading, when Article 30 must be discussed and is once again subject to approval, you reject the proposed language and maintain the current language of the Constitution.

2 responses to “Protect Reproductive Rights in the Dominican Republic”