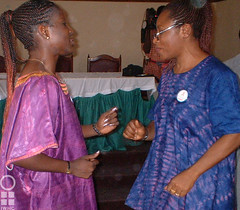 On the heels of removing the Global Gag Rule and reinstating funding for the United Nations Population Fund (UNFPA), the new U.S. Administration yesterday set another powerful precedent when it formally endorsed a United Nations (UN) statement calling for worldwide decriminalization of homosexuality. The US joined 66 other UN member states – including all 27 European Union members – in taking this critical step to further human rights. The news marks another moment since January 20 when “change” seems so tangible.

So now I’m eager to know, “what’s next!?” For the US, I hope we hold ourselves accountable for signing this document as the cases to overturn Proposition 8 unfold in California. I am also becoming more and more hopeful that next steps will include ratifying two central human rights treaties that have, to our nation’s embarrassment, not yet been signed by the US: the Convention on the Discrimination of all Forms of Discrimination Against Women (CEDAW) and the Convention on the Rights of the Child (CRC).

Outside of the US—aside from urging the remaining 126 UN member states to endorse this statement, let’s encourage Pope Benedict in Cameroun this week to take the opportunity to stand up for human rights and publicly condemn discrimination on the basis of sexuality. We have reason to believe that this could actually happen. Just a few months ago, the Holy See said that it urges all States to remove criminal penalties against homosexuals. In Cameroun – where penal code criminalizes actual or perceived same-sex sexual relations – and in so many countries, for that matter, the Pope’s public voice of support is desperately needed.

Also vital is more community activism around LGBTQQI rights.  One of the International Women’s Health Coalition’s partners in Nigeria, the International Centre for Reproductive Health and Sexual Rights (INCRESE), advocates for the sexual health and rights of society’s most disenfranchised groups, including sexual minorities – as well as youth, survivors of sexual violence, and commercial sex workers, among others. They face a Minister of Foreign Affairs who recently said that no organized gay groups exist in Nigeria, and that an unorganized constituency has no rights. INCRESE’s work to defend human rights is a model for challenging the culture of silence around sexuality – whether it’s around same-sex or opposite-sex sexual relations.

The Pope Spends His Last Day in Cameroun
The Pope in Cameroun: Reactions from the Front