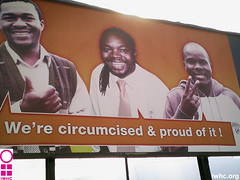 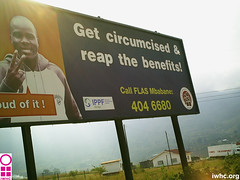 About a year ago, my colleague was in Swaziland and drove by this billboard promoting adult circumcision. Driving too quickly to do a double-take, she returned to the site later to confirm that she had read the the billboard correctly.

Three African studies in 2006 showed that male circumcision could significantly reduce a man’s risk of contracting HIV from vaginal intercourse. “Significantly” in health study-speak might not mean what you think it means though. The studies, which examined nearly 8,000 men ages 18-24 in Kisumu, Kenya and Rakai, Uganda, found that male circumcision reduced men’s risk of contracting HIV from vaginal intercourse by as much as 53 percent. These studies corroborated findings from an earlier study in South Africa, which reported reductions as high as 60 percent. A 50-60% reduction is not 100%. Not by a long shot.

But since these studies were published, sliced foreskins have replaced sliced bread as the next best thing. Bad puns and gory images aside, the avid support for male circumcision among public health professionals, funders, and the public alike has often failed to ask the simple question: What does this mean for women?

Circumcision itself does not offer a man’s current partner(s) (female or male) any protection from contracting HIV. Many men – newly or previously circumcised – assume that circumcision will fully protect them from HIV, so they feel inclined to “reap the benefits” by pushing for sex without condoms, jeopardizing their own health and that of their partner(s). Moreover, after the operation, many men do not wait the requisite six weeks to let the wound heal before having sex – again, putting their lives and that of their partner at risk. Surely, there may be some indirect benefits to women. For example, expectations of the surgery may bring men into local clinics that would not otherwise visit health services, and this can provide an opportunity to educate men on safe sex and provide access to male and female condoms.

But we all need to get our facts straight. This week, the World Health Organization (WHO), the Joint United Nations Programme on HIV/AIDS (UNAIDS), the AIDS Vaccine Advocacy Coalition (AVAC), and Family Health International (FHI) launched a website – the Clearinghouse on Male Circumcision – to do just that. Their page about the effects of adult male circumcision on women’s health includes some useful resources. Also check out Straight Talk About Male Circumcision – a post by Kate Bourne, the Vice President of International Policy & Regional Programs at IWHC, to learn more about what male circumcision means for women.

Whitney Welshimer is a Program Assistant for Communications at the International Women’s Health Coalition. Read her full bio here.

Video: The United Nations and the Commission on the Status of Women
Three Ways to Reduce the Burden of AIDS Caregiving on Women

Get the latest news and updates in your email