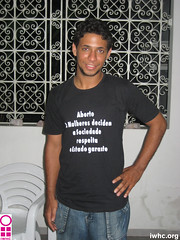 Grupo Curumim is a feminist and anti-racist organization which aims to strengthen women´s citizenship in all phases of their lives by promoting human rights, integral health, gender rights, and reproductive rights, under the perspective of ethnic-racial and gender equality, social justice and democracy. Founded in 1989 by experts in public health and women´s rights, the organization has strengthened its activities especially in two key points: the empowering of adolescents and young people and the improvement of the attention given to women, especially to maternal health. The International Women’s Health Coalition has supported Curumim since 1994.

The picture above shows Léo, who participated in Grupo Curumim´s trainings about 4 years ago and is now a member of Curumim´s youth group, which trains youth and engages in advocacy for sexual and reproductive rights. The translation of his t-shirt is: “Abortion – women decide – society respects – the State guarantees.”

The following is Grupo Curumim’s response to the issues raised by the recent news of an abortion acquired by a nine-year-old Brazilian girl (link goes to a Time article about the resulting scandal) who was raped and impregnated by her stepfather. This text is translated from the original Portuguese.

The case of the girl from Alagoinha is only one of many incidents that happen every day, which are not in the news and exposed in such an astounding manner as this. According to the System of Information on Live Births (SINASC), from 2000 to 2006, 10,860 girls aged from 10 to 14 gave birth in the public and private health systems of our state. This little girl´s pregnancy has to do with the situation of social vulnerability, lack of information and access to health care, as well as the prominence of sexual violence. As per the Brazilian Penal Code, at this age range, it is understood that every pregnancy is the result of a rape and the public system can offer the service, as a right, to terminate the pregnancy. In cases of rape, the victim and her legal representatives must be informed about their right to terminate the pregnancy, a right under the law, so that they can decide if they are going to terminate the pregnancy.

How many girls are, at this moment, in need of information, care, shelter and access to quality health care? According to our principles, we fight for all women to exercise their human rights, including basic citizenship rights, such as the right to health. The IMIP (Maternal and Infant Institute of Pernambuco) is duly accredited by the Ministry of Health to provide legal pregnancy terminations in cases of rape. Based on the current law and protocols for abortion under the law, the Women´s Movement worked with the state for the girl to have her rights preserved. The State performed its role and, with the family´s authorization, saw through the transferring of the girl to a health institution that could give her the appropriate health services.

Unfortunately, the girl and her mother faced some barriers to access the abortion, so it was necessary for there to be careful follow-up from the Women´s Movement so that their right to access to safe abortion was respected and truly guaranteed. The church and conservative forces within Brazil vehemently protested the young victim’s right to terminate her pregnancy.

We congratulate the State Public Ministry, the State Department for Politics Addressed to Women and CISAM (Integrated Health Center Amaury Medeiros) which strengthened and supported by the Women´s Movement of Pernambuco, gave (and are still giving) support to this little girl and her poor family to exercise their rights with the necessary protection and care.

Join us in commending the hospital team who did the abortion procedure and the feminists who stood up for this young girl.